Springer has another issue while awaiting Blue Jays debut 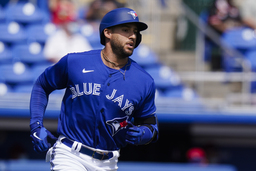 ARLINGTON, Texas (AP) George Springer is now dealing with another issue while waiting to make his debut with the Toronto Blue Jays, after starting the season on the injured list with a strained left oblique muscle.

Springer was on track to play Thursday for the Blue Jays in their first home game before feeling tightness in his right quad while running the bases.

Manager Charlie Montoyo said before Wednesday's series finale at Texas that Springer ran the bases after taking live batting practice before Tuesday's game. Montoyo said there were no issues with the oblique.

The 2017 World Series MVP with Houston signed a $150 million, six-year contract during the offseason.

Montoyo said the Blue Jays were still gathering information on Springer's quad and waiting for the results of an MRI exam. He didn't know the severity of the additional soft-tissue issue.

"Everybody's concerned because those injuries, you just never know where they are," Montoyo said. "It's tough because you've got to be careful, just like with the oblique. Because if you pull it worse then you're really out for a long time. So that's the one thing about those injuries for anybody, that you have to be patient, be careful."

Springer opened the season on the injured list after not playing any exhibition games since March 21. The outfielder was initially scratched from a March 9 game because of tightness in his abdominal muscles.

When talking to reporters Tuesday, the 31-year-old expressed excitement about the opportunity to play Thursday, when the Blue Jays host the Los Angeles Angels at their spring training home in Dunedin, Florida.

Montoyo described Springer as "a little disappointed" on Wednesday.

The manager said Springer stopped running when he felt the tightness, and when that hadn't subsided later, he realized it was more than a cramp and had an MRI.