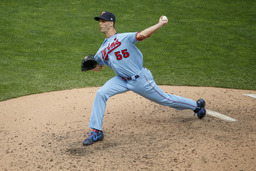 MINNEAPOLIS (AP) The Minnesota Twins and closer Taylor Rogers agreed to terms Thursday on a $6 million, one-year contract, according to a person with knowledge of the deal.

The person spoke to The Associated Press on condition of anonymity because the contract had not yet been finalized.

Rogers compiled a 4.05 ERA in 21 appearances with nine saves and two blown chances during the abbreviated 60-game season.

Rogers took a step back this season after notching 30 saves with 90 strikeouts over 69 innings in 2019. With Wisler, Sergio Romo and Tyler Clippard now free agents and Trevor May signed with the New York Mets, the Twins will have some setup roles to fill for bridges to Duffey and Rogers.