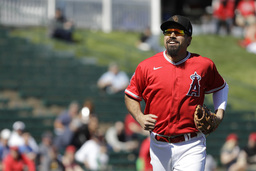 TEMPE, Ariz. (AP) Anthony Rendon had to laugh at the notion that he picked up right where he left off in helping the Washington Nationals win the World Series last year. Still, it was nice to leave his first game in a new uniform with a 1.000 batting average.

Rendon went 2 for 2 in his spring training debut with the Los Angeles Angels, driving in a run and scoring one Tuesday night during a 7-3 win over Cincinnati.

Back from spending time with his wife and newborn child, the All-Star third baseman played three innings in the field.

"It's inevitable. You've got to get out there every day to get comfortable," Rendon said. "So Day One, you take in stride and take it slow, too. Not try to get too crazy."

Rendon, who signed a $245 million, seven-year contract as a free agent last December, was just one of the big-name Angels players to play for the first time this spring. He batted third, between AL MVP Mike Trout and designated hitter Shohei Ohtani, the two-way star from Japan who also pitches.

Outfielder Justin Upton and first baseman Albert Pujols also were in the lineup for the first time this spring.

"Definitely exciting. Just trying to see how it's going to pan out throughout the year," Rendon said. "Kind of getting used to each other and getting in the dugout and seeing what guys' routines are at, and you don't want to get in anybody's way at all."

The major league leader in RBIs last season, the 29-year-old Rendon has hit .301 or better the past three seasons, with two 100-RBI campaigns. He's totaled 83 home runs in that span, including a career-high 34 last season.

Last October, his home run off Zack Greinke began Washington's late rally in Game 7 at Houston for the championship.

"Right now he's one of the better clutch hitters in the game. He almost 100 percent of the time works a great at-bat," Angels manager Joe Maddon said. "He one of those dudes that can handle good pitching well and you can't say that about everybody."

Rendon heard the cheers from the small crowd at Tempe Diablo Stadium as he walked up for his first at-bat as an Angel in the bottom of the first inning. He worked the count to 3-2 before lining a single to left field, moving Trout to second base.

In the bottom of the second, Rendon picked up his first RBI wearing Angels red when he sliced a two-out, opposite-field single to right field to drive in David Fletcher.

"He wasn't really swinging too hard. He had a two-strike approach, getting the bat on the ball," Ohtani said through a translator. "It was really impressive. A very professional approach."

At the end of the third inning, Rendon walked back to the Angels clubhouse and stopped to sign autographs for a bit. He said the excitement of being in a new place with a new team hasn't worn off.

NOTES: About two dozen media members from Japan were at the game to see Shogo Akiyama, new to the Reds, and Ohtani, a huge star in that country, face each other. Akiyama debuted in center field on Sunday, and played left field on Tuesday. . The Angels wore black Orange Coast College caps in the field in honor of head baseball coach John Altobelli, wife Keri and daughter Alyssa, all who died in the helicopter crash that killed Kobe Bryant and daughter Gianna last month. . Angels OF Brandon Marsh, a top prospect, has an elbow strain from trying to make a diving catch and will be out indefinitely, Maddon said. He suggested that Marsh could miss the rest of spring training.