OF Avisaíl García agrees to $20M deal with Milwaukee Brewers 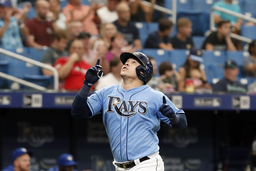 MILWAUKEE (AP) Now that the Milwaukee Brewers have added Avisail Garcia to their talented outfield, Ryan Braun could see more time at first base.

Garcia's $20 million, two-year contract was finalized Tuesday, a deal that includes a 2022 club option and could be worth $30 million over three years.

"Ryan's going to see some time at first base," general manager David Stearns said. "He's open to it. He understands it. We certainly believe he can play over there at a good level, so that will be part of the rotation in 2020 but that will not be his exclusive position."

Garcia batted .282 with a career-high 20 home runs and 72 RBIs for the Tampa Bay Rays last season, spending most of his time in right field. He joins a crowded Milwaukee outfield that includes 2018 NL MVP Christian Yelich, Braun and two-time All-Star Lorenzo Cain.

Milwaukee also agreed to a one-year deal with corner infielder Ryon Healy that pays a $1 million salary in the major leagues and $250,000 in the minors, with $250,000 guaranteed. He could also be an option at first base. The 27-year-old Healy batted .237 with seven homers in 47 games last season with the Seattle Mariners.

Garcia was limited by knee and hamstring injuries during his final season in Chicago in 2018. Garcia helped the Rays reach the AL Division Series last season for the first time since 2013.

"The trainers in Tampa did a great job with me," Garcia said. "When you're healthy, you can do a lot of things. I think that's the case with me. I got to play every single game. I got surgery on my knee in 2018, now I go to Tampa and stay healthy, and I put up good numbers."

"I think it's a great place to play baseball," Garcia said of Milwaukee. "They are ready to compete, so that's what I liked. I like to win. That's the right team to go to."

Garcia has a career average of .273 with 96 home runs and 374 RBIs since beginning his major league career with the Detroit Tigers in 2012.

Milwaukee also announced it has signed infielder Jace Peterson to a minor league contract with an invite to major league spring training. Peterson batted .220 with two homers in 29 games with Baltimore last season.