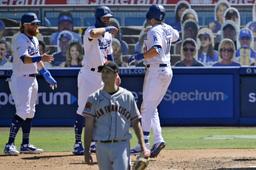 The Dodgers have won nine of 12, and they took two of three from their NL West rivals in the series. They've homered in 11 straight games, and their 29 long balls lead the majors.

With the Dodgers trailing 2-0 in the seventh, Cody Bellinger singled off Giants starter Kevin Gausman with one out and Justin Turner followed with a single off submariner Tyler Rogers (1-3). Max Muncy took a called third strike, but Pollock sent a 3-2 pitch to left-center for his fourth homer and a 3-2 lead.

"I feel pretty consistent every day, even the days where I don't get any results," Pollock said. "I'm competitive with my at-bats."

In the eighth, Will Smith drew a leadoff walk and Kike Hernandez followed with a double off Caleb Baragar. They scored on Betts' shot to left-center after he was hitless in his first three at-bats, making it 6-2.

The Dodgers had seven hits a day after getting two in a 5-4 loss.

"When we can string together a little more consistent at-bats, we can do some damage," Pollock said.

Jake McGee (1-0) got the win with a hitless inning of relief.

Mike Yastrzemski snapped a scoreless tie with a two-run single in the fifth, giving the Giants a 2-0 lead.

Yastrzemski had one of two hits for the Giants, who put just two runners on base via walks through the first four innings against Walker Buehler.

In the fifth, Pablo Sandoval walked and Buehler hit Austin Slater with a pitch, putting two Giants runners on base in the same inning for the first time. They moved up on Buehler's wild pitch.

After Tyler Heineman struck out, Yastrzemski stroked a two-strike single to center, scoring Sandoval and Slater.

Buehler gave up two runs and one hit in 5 2/3 innings, his longest outing in three starts this season. He struck out six and walked four.

The right-hander issued a four-pitch walk to Yastrzemski to open the game and was wild, high and outside, until settling down. Buehler retired the side in the second and fourth before the Giants struck in the fifth.

"It's hard on a team that's this good - you don't want to mess it up. I didn't mess it up too bad," he said. "Keep trying to get where I want to be. After the last two, trying to take a step forward."

San Francisco's Donovan Solano, the leading hitter in the majors, extended his career-best hitting streak to 14 games with a single in the eighth.

Gausman allowed one run and three hits in 6 1/3 innings. He struck out six and walked none before being pulled.

"I felt like I had more in the tank. My limit is not 80 pitches," he said. "I pitched well enough to warrant getting a couple of more guys out."

Giants manager Gabe Kapler cited the 81-degree temperature and Gausman facing the toughest part of the Dodgers' order for the third time in replacing him with Rogers.

"It just felt like the right time to keep him healthy and strong and safe all the way through the season based on getting into the seventh for the first time," Kapler said. "At the same time, we had a reliever ready who we felt confident could get us a ground ball with a runner on first base and get us out of it."

Giants: RHP Jordan Humphreys was placed on the restricted list for family reasons. ... LHP Jarlin Garcia was reinstated from the 60-day IL.

Dodgers: SS Corey Seager, who left Friday's game with lower back discomfort, is not being considered for the injured list. Instead, the team wants to give him a few days and reassess how he feels.

After working a 3-0 count, Pollock couldn't hear the plate umpire call a strike before his home run. He attributed it to the ump's voice being muffled by a face mask and the pumped-in crowd noise.

"Yesterday was a little mellow and today the fans were going nuts," Pollock said. "I couldn't hear the umpire from 10 feet away from me it was so loud. It's weird. Our little cardboard cutout guys were going nuts today."

San Francisco acquired OF Luis Basabe from the Chicago White Sox for cash. Basabe hit .248 with 104 doubles, 40 triples, 44 homers, 257 RBIs and 116 stolen bases in 598 career minor league games with the Red Sox and White Sox organizations. He will report to the alternate training site in Sacramento. RHP Trevor Cahil was added to the taxi squad. LHP Andrew Suarez was optioned to Sacramento and added to the taxi squad. INF Abiatal Avelino was designated for assignment.

Dodgers: RHP Dustin May (1-0, 2.63) starts Monday in the opener of a four-game home series against San Diego.