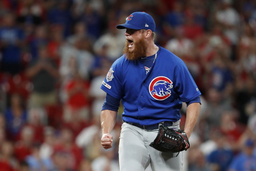 ST. LOUIS (AP) Chicago Cubs pitcher Kyle Hendricks has no logical explanation for his success against the St. Louis Cardinals.

"Nothing in particular, I think I've just been making good pitches," Hendricks said.

Hendricks struck out seven in seven innings and Ian Happ hit an RBI single in the sixth inning to break a scoreless tie as Chicago beat St. Louis 2-0 and moved into a tie with the Cardinals atop the NL Central.

The teams have identical 57-50 records. The Cardinals have lost three of their last four.

Hendricks allowed seven hits and didn't walk a batter in a 104-pitch effort. He has allowed just one earned run over 23 innings in three starts (0.39) against St. Louis this season.

"What he does plays well against them," Chicago manager Joe Maddon said. "They weren't getting good swings on him. He was strong the whole way."

"He does what he does, we got a lot of guys in scoring position and he tightened his belt," Wieters said.

Added St. Louis manager Mike Shildt: "Give him some credit, he's a pitch-maker."

Closer Craig Kimbrel picked his eighth save in 10 chances. He worked out of a jam in the ninth. With runners at second and third and one out, he got Wieters to ground out before striking out Yairo Munoz.

Happ, who was recalled from Triple-A Des Moines on Friday, singled off Miles Mikolas (7-11) and scored Kris Bryant, who had reached on a one-out error by third baseman Tommy Edman. Anthony Rizzo drew a walk, setting the stage for Happ's run-scoring hit.

"Today was a good day, it was nice to come through," Happ said. "I think I've been putting together really good at-bats. And that's the most important part.

Happ was 1 for 12 before the run-scoring hit.

"It was a good feeling for me," Happ said.

Mikolas did not allow an earned run over 5 2/3 innings. He gave up six hits, struck out three and walked one.

"I did all I could to keep that game close as long as I could," Mikolas said.

Chicago scored an unearned run in the eighth inning. Javier Baez hit a two-out double that was originally ruled foul, but changed on video review. A pick-off throw to second from catcher Wieters skipped into the outfield and allowed Baez to score.

St. Louis failed to score despite leadoff doubles in the second, third and fourth innings.

Cardinals first baseman Paul Goldschmidt, who entered the game with seven homers in his last eight games, had a pair of doubles.

St. Louis LHP Adelberto Mejia, claimed on waivers from the Los Angeles Angels on Wednesday, was put on the active roster prior to the game. RHP Daniel Ponce de Leon was sent to Triple-A Memphis.

Cardinals: INF Matt Carpenter (right foot contusion) will continue his rehabilitation assignment at Triple-A Memphis on Thursday. He has gone 0 for 21 in seven games split between Memphis and Double-A Springfield.